“Man is born to die. His works are short-lived. Buildings crumble, monuments decay, and wealth vanishes, but Katahdin in all it’s glory forever shall remain the mountain of the people of Maine.”

Percival P. Baxter was governor of Maine during the years of 1921-1924. He enjoyed fishing and vacationing in the Maine woods throughout childhood and his affection for the land and Maine’s wildlife were instrumental in his creation of a park for people of the State of Maine. He began to fulfill his dream of a park in the year 1930, with the purchase of almost 6,000 acres of land, including Katahdin, Maine’s highest peak, Mt. Katahdin.

The North gate to Baxter is located just 15 miles from Shin Pond. There are over 40 peaks and ridges besides Katahdin in the Park. The trail system features over 215 miles of trails popular with hikers, mountain climbers and naturalists. Baxter State Park operates eight (8) roadside campgrounds and two (2) backcountry campgrounds. There are also numerous individual backcountry sites for backpackers. The park also consists of many spectacular Rivers, Streams, Ponds and Lakes for canoeing, fishing and swimming

The Park is home to numerous mountains, the two most notable clusters being the peaks comprising and surrounding the Katahdin massif and the cluster of peaks in the northern part of the Park consisting of the Traveler Range. Pink and white Katahdin granite make up the rugged mountains on the southern end of the Park while the Traveler range further to the north is composed of Rhyolite with prominent columnar jointing visible in many places. The north end also features sedimentary rock in certain localities. Glacial features are abundantly evident throughout the Park in the form of kettle ponds, eskers, moraines, erratics, the Knife Edge arête, the glacial cirques of Katahdin and the splendid U-shaped valley running north to south from the Travelers to South Turner.

South Branch Pond is a great destination for families or individuals looking for hikes of various difficulty, beautiful waters to paddle, or just a beautiful picnic spot. 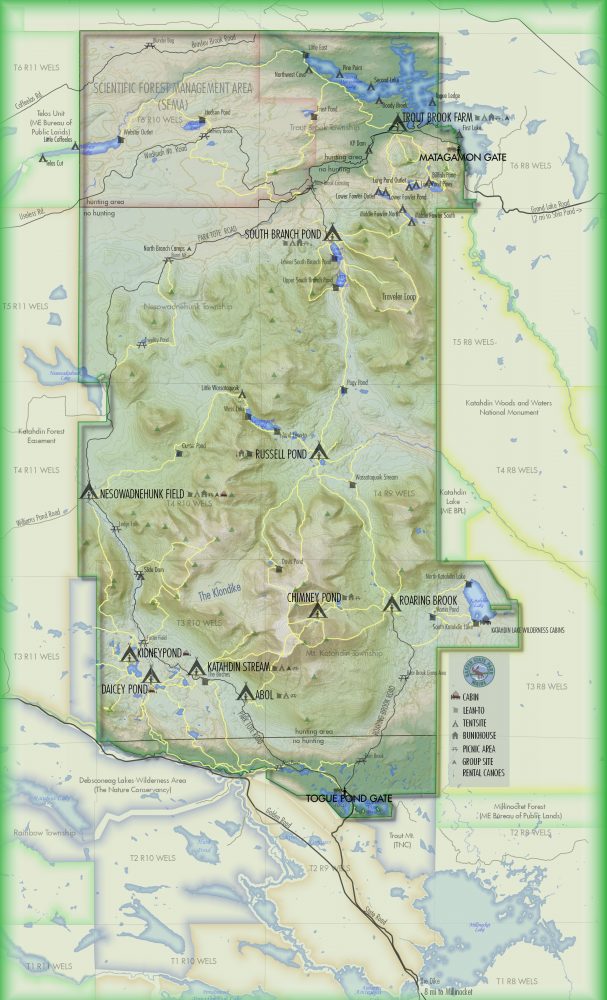